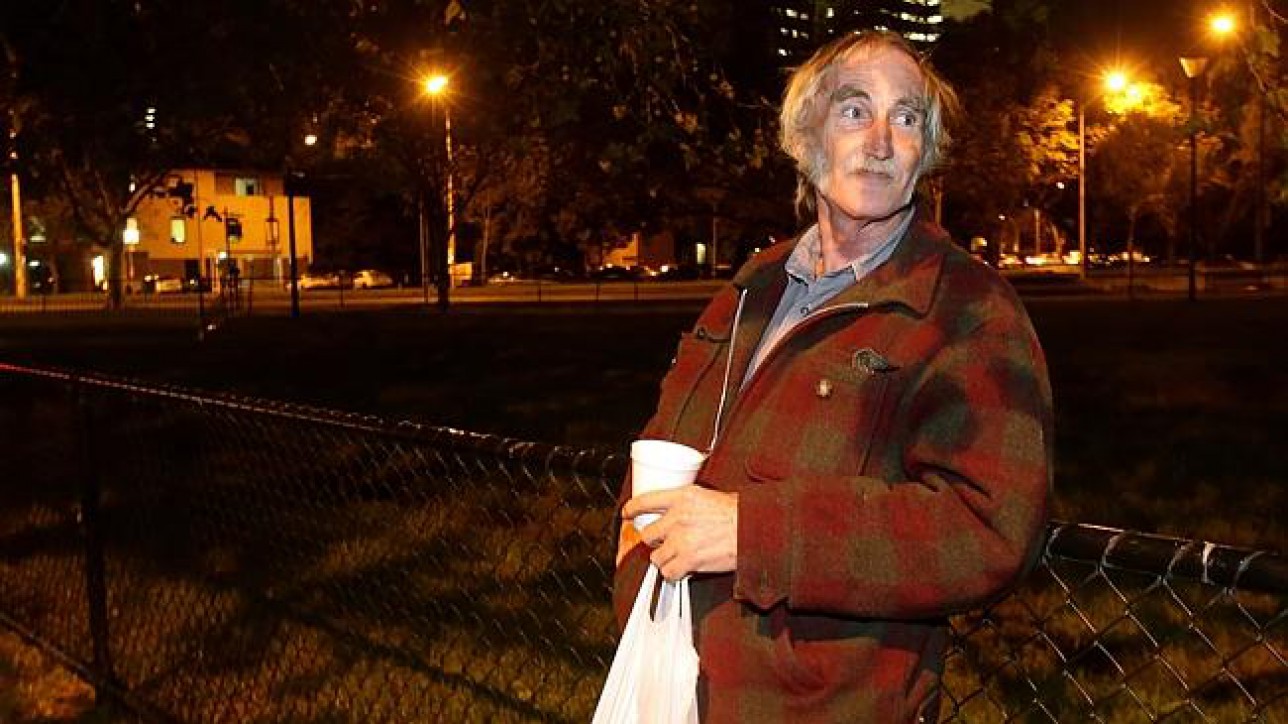 It’s just after 9pm on a cold Melbourne night. Sarah is standing outside Flinders Street station, wearing only an old pair of trackpants and a thin jumper. There is deep fatigue etched in to her face.

“I’ve never felt what it’s like to struggle,’’ she said. “ I’ve lost everything. I have to start from the bottom of the food chain.”

She’s new to Melbourne from regional Victoria and trying to find her feet after breaking up with her boyfriend of seven years and finding herself on the street.

Sarah, 23, has two children — a two-year-old and nine-month-old. She says they were taken off her because “I’m not stable at the moment”.

She has come to the Avalon Centre’s mobile clothing service in the hope of finding something to add to the bag she left with.

Flinders Street station is the fourth of five stops the Avalon Centre makes on its weekly ritual following the city’s food vans. Avalon finds plenty of demand for its services among Melbourne’s homeless.

“I need to find a stable place and get a TAFE course going, or maybe a singing course and get myself better,” Sarah said.

“I’ve been a street kid all my life but I’ve always had a roof over my head. I’m living at the bottom of the barrel.”

Debbie Holmes at Avalon’s overcrowded home in East Malvern. Picture: Hamish Blair Source:News Corp Australia
Sarah’s story is one of hundreds Deborah “Debbie” Holmes has heard in the 27 years she has been running the Avalon Centre in Malvern East.

Debbie sets out to provide clothing and blankets, a bed or simply to be a good listener.

Debbie’s house doubles as a storage unit for donated clothes and a drop in centre.

“I don’t see it as my home — this is their home. I try to make it homely. I just live in the office or I sort out the clothes,” she said.

On this night I’m in a van with four other volunteers who range in age from 18 to their mid-40s.

Each of them are here for the same reason — to help people.

By 6pm the vans are full and after a quick tour of the centre we’re ready to hit the road.

People rummage for warm clothing at Avalon’s stop in North Melbourne. Picture: Hamish BlairSource: News Corp Australia
THE first stop for the night is North Melbourne. The temperatures are starting to drop and jackets are in demand among the homeless.

At least a dozen people are gathered around bags of clothing, which for some means the possibility of a warm night, even if it is outside.

“I wanted to reach out to the community,” Debbie said.

“The clothes distribution program has expanded so much. It was difficult when we first went out. People didn’t really know us. We just used to hand out socks but now they know us they just come.

“We don’t get a lot of gratitude from them. But we come out every week. Nothing stops us.”

Once we arrive a handful of people come out of the darkness and head straight to the vans for a hot drink and a bite to eat.

A few then head over to the Avalon’s vans to check out the clothing.

John, who withheld his surname, says most of the clothing on his back is from The Avalon Centre. He’s been a regular visitor since December.

“The socks and jocks are great. Most of us camp out so we come most nights. I’m after collared shirts and pants — I am able to get that stuff here. They do a damn good service actually.”

Russell McMurphy holds his hot cup of coffee while watching the group rummage through the clothing.

Russell is upset because he thinks some people take advantage of the service.

“People should just take what they need,” he said.

“Some people come every Sunday and just grab things. I know they’re here if I need them. But people are just filling bags up while others are missing out.

“I got this jacket from here a while ago — it’s been good.”

“I come every Sunday and have a cuppa. It’s something to do. I had a heart attack so I’m not working much now.”

When we get to Fitzroy, the crew is handed a bag of sandwiches from the food vans, which is dinner for the night.

One man asks for a blanket and is happy when he’s provided with one.

By this stage people are lining up at the van for help.

A younger crowd look for clothes at the Avalon Centre’s Southbank stop. Picture: Hamish BlairSource: News Corp Australia
SOUTHBANK is a different story. There are young people drinking and talking about “how s**t life is” before getting on their hands and knees to find something to wear.

One girl is wearing a T-shirt, which has a derogative reference to the Prime Minister, as she rifles through clothing.

This stop is outside crisis accommodation. People are often escaping domestic violence and have nothing. We don’t stay long, due to the tight schedule.

THE Flinders Street stop is described by Debbie as the most “chaotic”, but tonight it’s reasonably quiet.

The vans start to pack up, but there’s a man who has nowhere to go for the night and is visibly upset. Debbie hands him enough money for him to stay the night at a backpackers.

“I didn’t know what to do. I couldn’t sleep tonight if I didn’t do something (for him),” she says.

Victoria Market is the last stop and is where I meet Alfred.

He’s been a regular for a few years and often attends the centre on Mondays for a hot drink and a catch up.

“I think it’s (Avalon) fantastic. It’s a unique thing in Melbourne. I’ve never seen a van that gives out clothes and blankets to the needy and homeless.”

THERE are an army of volunteers who dedicate hours of their time assisting Debbie on her mission to help everyone she can.

Bayside resident Simon Reichelt is only in his second week of volunteering, but he’s already enjoying it.

“I just wanted to do something to give back,” he said.

Brennan Raymakers, 21, has been with the centre for six weeks and said the best part was being able to “get your hands dirty”.

“It’s great. It’s actually getting involved, going off and doing it yourself. I think it’s really good what they’re doing, front line serving.”

“I think it’s so different from any other general experience that I will have at high school. You don’t really experience the world. I’m really enjoying it. I love being able to help people.”

Avalon is run by volunteers and does not receive any government funding.

— “The fact that we are just run by volunteers means there is always something that needs doing. We desperately need people to help,” Debbie said. “We’re also in need of mens jeans, coats, jackets, jumpers and trackpants as well as blankets and sleeping bags. We never say no to anything.” This of course includes money.

Debbie said money is needed to buy new underwear, socks, toiletries and to go towards petrol, vehicle maintenance and to help pay the rent of the storage space they recently hired due to running out of space at the centre.

The Avalon Centre is located at 1936 Malvern Rd, Malvern East.